Majestic City is a unique destination center where you can shop, dine and watch a movie all under one roof

From the passage of time

The "Majestic City" in operation will be a unique concept in Sri Lanka providing diverse facilities of a high standard under a single roof for the people. Stage I involves the construction of a centrally air-conditioned shopping complex consisting of 96 shops, a supermarket, a bank, a restaurant, fast food outlets, offices, apartments and a basement car park. The complex will be serviced by escalators and elevators, with ample stairway and walkway arrangements including an atrium which has been designed in such a manner as to provide a panoramic view of the upper floors of the building to make shopping a pleasure. The Atrium area would be utilized as an arcade with the atmosphere of a continental type sidewalk cafe with shops selling fast foods, confectionaries and cigarettes. It will also be used as a venue to stage variety entertainment shows, exhibitions and trade promotion displays. The total rentable floor area is 60,064 square feet excluding the basement car park covering a floor area of 32,179 square feet.

The costs of Stage I was to be financed by equity of Rs. 75 Million and the balance by debt capital. Although 3 Million shares of Rs. 10 each were offered to the General Public for subscription by Prospectus, the response from the public and institutional segment of the capital market was not up to expectation. Therefore, Ceylon Theatres Limited as the main promoter of the company along with their nominees had to take up the unsubscribed shares. The funding support given at this time by Peoples Bank was invaluable.

Following the performance of Phase I, Phase II has been earmarked incorporating an entertainment centre. Phase II will provide for a children's fun land, a cinema replacing the Majestic Theatre which formerly occupied the present site, a food street, a roof top diners club, another bank, additional shops and offices and two levels of parking bays.

"Majestic City" Phase I is a custom designed shopping mall in Colombo, which is not just a shopping centre but a self-contained environment and, like a city, has its own characters, and character. Phase II would add the modern entertainment centre originally intended for the complex.

With the rapid growth of the Sri Lankan economy, the country looks set to be a strong contender to take over as a leading regional investment centre. The increase in business activities, coupled with the increase in tourist arrivals, has created a demand for commercial space with recreational facilities. In planning our operations for expansion your Directors have considered these requirements and the country's need to create greater employment opportunities. The project also expresses our total confidence in the future of the country. It is the company's ultimate aim that "Majestic City" becomes the centre of excellence and quality development in Sri Lanka.

Phase II of the "Majestic City" complex was officially inaugurated on 07th December 1994. With the completion of Phase II, the complex will incorporate the entertainment centre originally intended for the complex. We are pleased that "Majestic City" has accomplished leadership in property development in the country and established a reputation as a prestigious shopping mall in the country.

The new Majestic Cinema provides all the modern amenities of a luxury cinema to cater to the increasing demand for western films and to attract the increasing tourist traffic. The cinema has been equipped to screen Digital Stereo films. The total expenditure to equip the cinema, excluding cost of air conditioning and the provision of an additional escalator, is expected to exceed Rs. 10 Million. This will be the only cinema in the country with all the latest facilities available to patrons in an altogether new environment.

Your company is a subsidiary of the Ceylon Theatres Group. Ceylon Theatres Limited has been in the forefront in the Entertainment industry for over 65 years and your Directors have considered this aspect in the construction of a luxury cinema at such cost in the "Majestic City" complex promoted by the Group despite the perilous state that the entertainment industry finds itself in today. 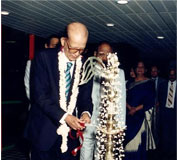 "Majestic City" has established a reputation as the premier shopping mall in the country and has, in its own way, contributed towards the provision of excellent leisure and shopping facilities which are pre-requisites for a capital city such as Colombo.

The Management has spared no effort in maintaining the ambience at the Majestic City complex for the comfort and enjoyment of its patrons. With the passage of time, the Management considers substantial upgrading warranted especially in certain areas and facilities within the complex. We will endeavour to consolidate and maintain Majestic City's premier status among shopping-cum-entertainment locations.

The refurbishment will be carried out in stages so as to minimize disruption to operations and to eliminate, as far as possible, any inconvenience to tenants and customers. This would include improvements to the outer façade, car parks, flooring and lighting. Further, changes will also be effected to the internal structure and layout and to facilities such as rest rooms, water supply and waste management. The Management considers this investment an absolute necessity and is confident that it will yield results and lead to improved returns to the shareholders in the coming years. 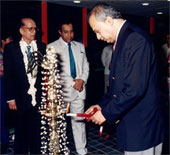 The refurbishment program for the Majestic City complex is being carried out in stages. Water proofing and certain ancillary work was concluded during the year. The company is now working on the plans for the interiors, painting and certain other areas which would be done during the current and the following year, without disruptions to the business operations of tenants and not unduly inconveniencing customers of the complex. Work is also being planned in a manner that would streamline operating cash flows and minimize borrowing. Despite the challenges posed by the current economic climate, we look forward with cautious optimism. Our focus will continue to remain on getting an attractive return to our shareholders and improving the business of our tenants.

Refurbishment work of Majestic City shopping and entertainment mall was completed during the current year at a cost of Rs. 176 Million. Work carried out during the year included the complete refurbishment of the basement Food Court with additional seating. Space has also been allocated for another food outlet thus giving additional rental income. The Galle Road entrance and atrium areas have been modified and refurbished to give a fresh new look. Further, services such as toilets, garbage disposal and certain other areas have also been refurbished in order to provide better facilities.

The company completed the refurbishment of the fifth floor of the Majestic City complex and set up three new cinemas. The existing cinema on the fourth floor of the complex was also completely refurbished. The cinemas, which included the first ever 3D cinema screen in the country, commenced operations on 01st December 2012. The cinemas have been rented out to the group company, Ceylon Theatres (Pvt) Ltd. and the company has invested in a 48% stake in its equity. This investment represents an exciting new avenue for the operations of the Company, since CTL has plans to expand its operations in its existing locations and expand to other new locations.